As much as you love your dog, owning one surely has its ups and downs. When your dog is downright naughty, sometimes the only thing you can do is laugh and share a dog shaming photo with friends and family. From eating poop to destroying carpets, there is no end to dog shenanigans. Dogs are famous for eating all sorts of things, but when they resort to coprophagy (eating poop) it can get downright weird. This dog was caught eating chicken poop and moms, rightly so, called, "Fowl breath!" This pup exhibited behavior worthy of a shaming. Not only did it destroy a baseball helmet newly ordered from Modell's sporting goods store, but also the dog shaming photo paper caption. 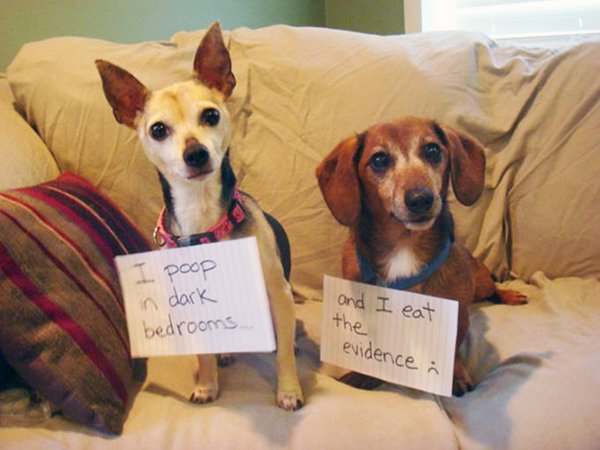 The best friends are those who know how to keep a secret or, better yet, cover up your wrongdoings. This dynamic duo will make you proud of them being dog partners in crime. Pascale Lemire is often credited for starting the whole dog shaming craze online. Beau, her infamous troublemaker, was charged with eating the underwear of Pascale's fiance and sentenced to life as a jerk. This pup put on a spectacle, literally. His obsession with eyeglasses led him to destroy a total of five. Too bad his owner was still able to see what he had done. There aren't too many things worse than having your dog go around licking his balls all the time. This dog was placed under house arrest and required to a wear a cone 24/7. This dog took to his own devices and helped himself to some leftover carryout. Well, they don't call them "doggy bags" for nothing.

8. I Can't Believe It's Butter

While it makes perfect sense for a dog to get into the trash or steal a nice juicy steak, you may not understand the temptation to eat butter. This dog must have gotten into a quarter pound stick of I Can't Believe It's Not Butter. What's worse than a child drawing on a wall with crayons? A dog painting his paw prints on a beautiful hardwood floor. *gasp* If it weren't for this grin, this could go down as the most disgusting thing ever. How cute is this?

11. The Elephant in the Room The elephant in this room is so obvious that it's staring everyone right in the face... right through the elephant's own face. They say not to give your pet dog toys that look like stuffed animals. This is a perfect example of why not.

12. Running Over the Big Dogs

This cute little pug gives new meaning to "running with the big dogs." He likes to use a doggy wheelchair to run over dogs at least four times his size. 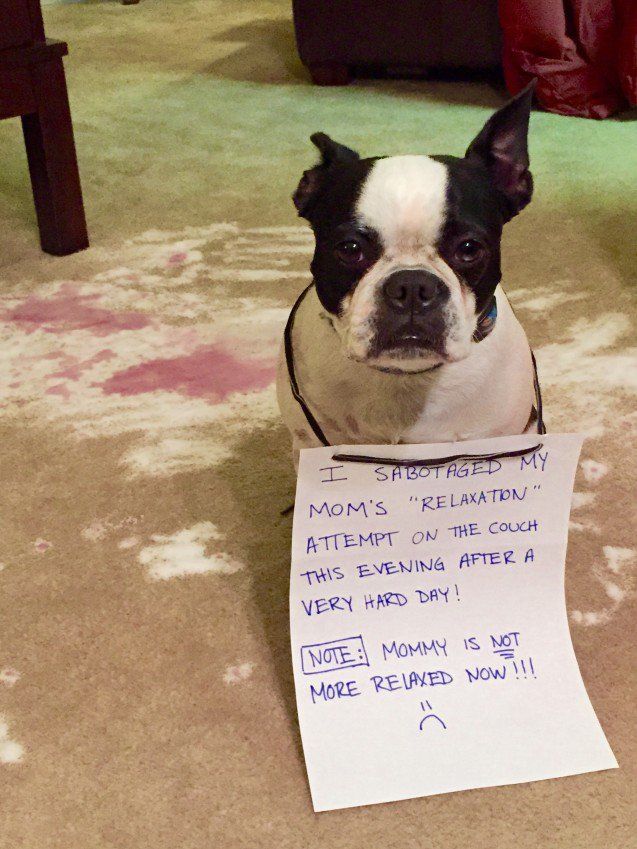 When you come home from work or a stressful day, there's nothing like being able to sit down on the couch with a nice cup of tea. You also look forward to cuddling up with your dogs, unless they do something like this. You know what they say about karma. What goes around, comes around. This dog, who happens to be named Karma, got just what he deserved.

It just doesn't get any more embarrassing than this. This poor dog who ate vaseline, of all things, has to walk around with his sticky mess.

So, what's the worst thing your dog has done? Perhaps it deserves its own dog shaming claim to fame.